We aim to reach out to neighbouring communities in the Western Cape and further afield by spreading the joy of singing through choral workshops with schools and community organisations. An example is our successful visit to Grabouw in 2017, where we joined with the Rural Arts Network in running an all-day “Choirmakiti” workshop with children from 4 rural primary schools, culminating in a concert with them in the evening to a capacity audience in the Grabouw High School hall. This extract from the Rural Arts Network Annual Report, and the pictures which follow, say it all.

In collaboration with the Cape Town Male Voice Choir we (RAN) had a fun-filled day of workshops with the focus on voice training, technique, history of choral music and learning new repertoire. 250 participants rotated between four venues, each with a professional musician to train and teach them. The day’s work culminated in an evening concert for an audience of 400+, made up of supporters from the farms and school communities that attended. 180 of our beneficiaries took part in this event with two of our marimba bands providing a pre-concert performance. Each choir had the opportunity to perform three songs after which several mass choir pieces were performed. The guest choir entertained us extensively with a wonderful repertoire that was both entertaining, and also proved to be motivational to our own choirs.
We will also continue to run other outreach projects within Cape Town, which recently included the ‘Link to Grow’ (committed to the advancement of women), and we gave a concert in aid of the ‘Big Issue’, job creation project in July 2018.”

Young and old caught up in the spirit of the occasion 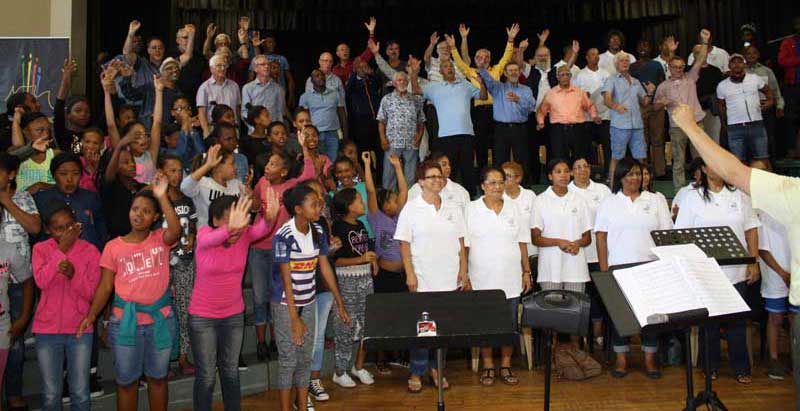 Finale of the evening concert

We have also collaborated with community outreach projects in Cape Town itself, an example of which is a concert we gave in 2018 in aid of the ‘Big Issue’, job creation project of the Linked to Grow organisation, with guest artists Louise Howlett and Albert Combrink.