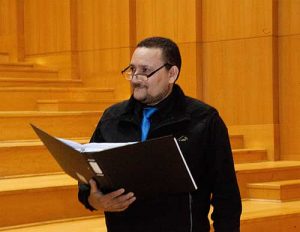 The Cape Town Male Voice Choir was formed in 1976 by Dr. Chris Molyneux who envisaged men of all colours, creeds and backgrounds coming together in celebration of song. The only criteria for belonging were an ability to sing and a commitment to the Choir. He led the Choir himself for 14 years, after which we have had a number of Musical Directors, most notably Bill Holland (1990-1993), and Margaret Barlow, who led us with distinction for 12 years in total between 1993 and 2015, when Peter Roux, our present Musical Director, took over the Choir. We have also been fortunate to have had many fine pianists as accompanists; most recently Warren Patientia and Jan Thorne.

The Choir is now about 40 strong, and thanks to a long-term development programme is now culturally diverse, truly reflecting the demographic make-up of Cape Town’s population. Over the years we have built up a large, varied repertoire of classical, popular, sacred and traditional music, sung in many different languages, and mostly in four-part harmony. In all that we do, we aim at musical excellence to challenge our singers to give of their best, and to spread the joy of choral music to our members and audiences alike. We have also been pro-active in recent years in bringing music to disadvantaged communities through outreach programmes which have included joint workshops and performances with local choirs.

We have performed in a wide variety of venues ranging from schools, homes for the aged and the needy, to major concert halls and churches in and around Cape Town, and the Kirstenbosch Botanical Gardens, where we traditionally lead the singing at the Rotary Carols by Candlelight every December. From time to time we partner or join with other choirs, particularly the Tygerberg City Choir and The Gentleman’s Ensemble; an a capella singing group from Gugulethu.

The Choir has also performed in the Royal Festival Hall, London, in an international choral festival prior to the 2012 Olympic Games, and in Argentina and Uruguay in a hugely-successful week-long tour in 2016, sponsored by the National Lottery Commission. On both occasions we were partnered by the CENESTRA Male Choir from Ekurhuleni, Gauteng, forming a powerful 90-voice combination which received standing ovations wherever we performed.

In recent years the Choir has extended its reach nationally, with tours to Gauteng and the Western and Southern Cape. All these tours have been greatly enjoyed by our members, giving them the chance of travelling to widely different places and of performing before new audiences. These outings also encourage members to get to know each other better, which invariably improves our social and musical harmony. Our Musical Director welcomes them too, as he has a captive choir throughout the tour for extra rehearsals!

Open the other pages to learn more about our history, musical staff and repertoire, look at our gallery, or listen to a few tracks from our CD. Please contact us if you need to know more about us, or are possibly thinking of joining or supporting us in any other way.