1976 – 1989
First musical director and founder, Dr. Chris Molyneux, whose vision created an organisation that has brought joy to many thousands of people. 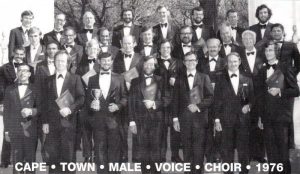 1977
Public concert organised by the choir at the Sea Point Civic Centre.
Out-of-town Concert at the Hermanus Anglican Church.
Grand tour to Clanwilliam.

1982
On-stage appearance at the Nico Malan Opera House providing a live, sung accompaniment to a slide show of Cape Town for WOCO International.

1985
Organisation of a Cape Town Massed Male Choir Festival – singing Stout-Hearted Men with nine other choirs and singing groups.
Performing at the opening of a shopping centre … the Tyger Valley Centre … and again at the Atrium in Claremont.

1986
Singing with the CAPAB Opera Chorus at the Nico Malan Opera House.

1990
Appointment of Bill Holland, as second Musical Director. He lifted the choir up from a temporary doldrum and increased its membership from 7 to 30.
Airing a new “jazz orientated” repertoire as guest performers in a Best of Broadway concert with the Cape Town Symphony Choir. The concert and music were arranged and conducted by Bill Holland and Keith Mattison.

1991
“Out of the Province” trip to the Roodepoort International Eisteddfod

1992
A new experience in entertaining children with a concert called Holiday Concert for Children at the Diocesan College Theatre.

1993
The appointment of Margaret Barlow as the third musical director, who, with her vast experience and expertise, has built on a firm foundation and brought the choir to an international standard of performance.
A fund-raising concert to help enable James Bhemjee, the “Singing Dustman”, to compete in the Roodepoort International Eisteddfod.
A gold win at the Roodepoort International Eisteddfod.
Carl Orff’s Carmina Burana with the Philharmonia Choir at the Nico Malan Opera House.
Performance on a World Cruise liner … the Sagafjord … and subsequently on the Oriana and the QE2.

1994
Participation in the first Caltex Masses Choir Festival in the Good Hope Centre.

1996
Participation in the first Voices of the World concert to be held in Africa … at the Newlands Stadium.

1998
Carols with Richard Cock in the Cape Town City Hall.

2000
Spring and Christmas concerts in the Baxter Concert Hall and Theatre.

2001
A never before digital group photograph of the choir and a CD, to keep up with the times!
This CD was also released

Pub singing at The Glen, The Pig, Forries and Pedlars.
Rehearsals at St Peter’s, Rhodes High School and Herschel Girls School.
The many friends of the Choir, the teas after concerts, and enthusiastic reaction from audiences who, until they heard us, thought that choristers were “a stuffy lot”.
After-parties with singing “duels” between choirs and choristers.